In the courthouse:
6 rows of wooden benches, 13-14 detainees per row. Plenty of room for me in the back row as the only observer. At least 3 different uniforms seen. Detainees already seated, not in shackles, with headphones for the translation. Almost all men—less than a handful of women, and of course no kids. These were not family units, The judge entered and noted that each had been charged with violation of immigration laws, which is a misdemeanor. He then noted that the court is not any immigration court but a court for criminal charges, that it is immigration courts that determine whether a defendant comes or goes. He confirmed that each detainee had met with a public defender (one on one?) and if they had had enough time with that public defender. Detainees responded si/no but virtually always toed the expected line.

There was one prosecutor in the courtroom.

The first question posed by the judge was whether each defendant had agreed to resolve their cases by pleading guilty. First, he says, he wants to be sure they understand the charge and consequences/penalties so he reviews their rights:

to remain silent;
to have legal representation;
to go to trial.

If the detainee pleads guilty, s/he will be waiving those rights. Possible penalties are maximum 6 month in prison and/or a $5000 fine. That’s not necessarily what the penalty WOULD be, it’s just the maximum. Also removal from the US and denial of return to US.

Judge then checks mental competency—anyone been treated for a mental disorder or taken any sort of drugs in the past 24 hours?) All reply no therefore presumed mentally competent. (judge repeats this question later).

The judge then asked each defendant individually: is that your correct name? do you understand the charges against you? did anyone threaten you or promise you something so that you would plead guilty? Do you wish to give up your rights and plead guilty?

Here is the charge: did knowingly and unlawfully cross the border away from an immigration approved crossing, thereby violating immigration laws.

The judge asked each detainee this set of questions and after each said they understood and wished to plead guilty, the prosecutor read the accusation:  On or about June 22, 2018, did you knowingly and unlawfully enter the US at a place not approved by US immigration? How do you plead, guilty or not guilty? (most replied “culpable”) Then he asked if the individual did knowingly and unlawfully cross the border “by rafting” and most replied yes. He did this for each individual.

Dates were primarily 6/22; about 18 were 6/23; 3 were 6/24; 1 was 6/19; 1 was 8/11/2013.
One person said no to pleading guilty and requested a trial—the judge set a preliminary court date and asked the public defender to be sure his client understood. That individual later changed and pled as did the others. One woman near the end did the same, but after consulting with the PD, continued to request a trial. So again a prelim court date (next Mon) and she was escorted out by a US marshal.

The hudge then proceeded to sentencing, asking the prosecuteor what her recommendation was.The first case, for ex, was for 30 days. The PD given a chance to comment (couldn’t hear him usually; likely tried to justify); the defendant was given a chance to speak (none did), and the judge imposed a penalty. In first case it was for 15 days. This was the pattern. The prosecutor routinely requested more days, the PD fewer, the judge gave less than the prosecutor asked. About 5 cases were done in this way. Then all the rest were done as one: judge imposed “time served”, which is the lowest possible sentence. He remanded them back to the immigration authorities and told them they could request immigration relief or appeal the sentence within 10 days.

The judge also noted (as a reason for the low sentence) the reasons they might have fled home to come here, the reasons for coming here (to work or be with family) and the lack of any criminal convictions in the US. And he encouraged them to seek legal ways to return because they seem to be good people and would be good and honest workers. He also warned them not to come back illegally because the charges and penalties could be more serious.

And that was it. I was ushered out before the detainees. A woman in a suit on the elevator answered my question, which was where do they go from here? All will be deported? And he said yes.

One defendant had been in the US for 26 YEARS, had owned a business etc. He was picked up for a driving offense. Was sentenced to time served but judge encouraged him to try to come back legally.

That was two hours total.

Mass trials and convictions and deportations. I have little doubt the numbers have since increased. 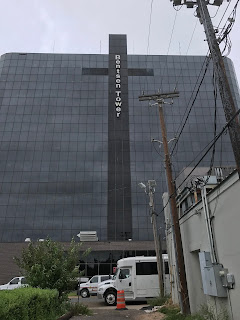 Side of the building where the federal court meets, about a block away and fully visible from the Respite Center. The cross is intentional.
Posted by From the Heartland to the Frontera at 8:57 AM