Crossing the border into Reynosa, Mexico

On our first full day in McAllen, late June 2018, we headed to the border via Uber. We'd been told it was like the "wild west" there. But it wasn't.

It was a pleasant walk across the bridge over the Rio Grand river; paid $1. We entered Reynosa, Mexico and walked a bit around the area, stopped in a candy store and got a few snacks to deliver back home. It was very quiet downtown on a Sunday. We didn't venture too far away from the downtown and then decided to head back.

FORTY FIVE MINUTES waiting in line to cross back over into the US. And it was hot; heat index of 111. It was difficult. We had planned to go to Sacred Heart to volunteer with Catholic Charities but it was getting later, and we were hot and tired. The entry processing room was air conditioned but that was all. We met a number of citizens and/or permanent residents who had crossed into Reynosa to buy party supplies and so on more cheaply. And they weren't complaining about the wait.

In order to seek asylum, the seeker must have a foot on US soil. When we crossed back from Reynosa to Hidalgo, using the pedestrian bridge, there were two men in uniforms who asked for identification. It seems that gate keepers have been sent to the Mexican side to prevent asylum seekers from crossing the bridge. Let me say that again....American border patrol agents were INSIDE Mexico preventing anyone from reaching the bridge to seek asylum.

And then they are accused of crossing at an "unauthorized location"....and convicted, and given deportation orders. More on that later. We are complicit in sabotaging the very asylum treaty we signed. 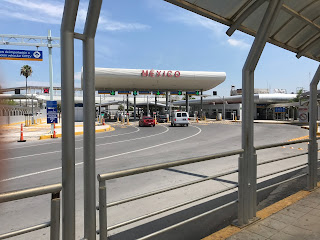 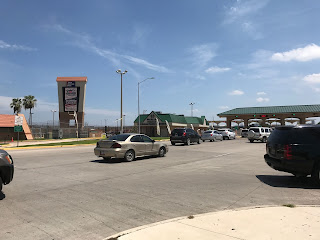 the bridge connecting Hidalgo and Reynosa (an approved crossing point) 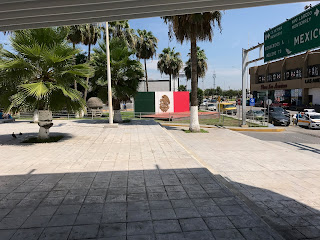 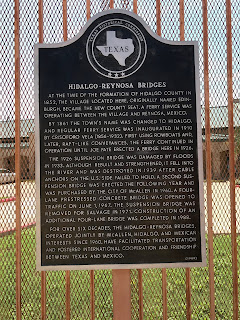 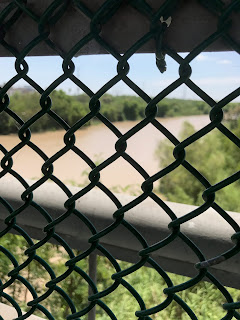 Posted by From the Heartland to the Frontera at 8:16 AM