and hopes for a cooler temperature were quickly dashed. It was in the upper 80's, hot before even heading downtown in the morning. Later that week, though, a cold front from Canada came through and of course I was the only person not wearing a coat. It was lovely.

I quickly got back into the routine and greeted people who were, by now, friends and colleagues. We revisited old jokes (no aguanto estos guantos!), got to know each other a little better (did that cook really raise a raccoon?), and settled into getting things done. Laundry, sandwiches, snack bags, clothes sorting, sundry bags, trips to the bus station. A certain predictability set in--between about 1 and 230 the center was quiet. Most who were taking busses that day had left and new refugees hadn't arrived. I began to go back to the siesta days of my time in Colombia--taking a longer lunch break but working longer before and after. My favorite hole in the wall: 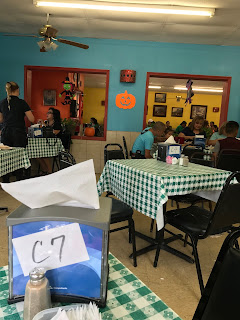 Where for under $12 I could get beans, rice, salad, and grilled chicken with onion and green pepper. Being unadventurous where food is concerned, I always ordered the same thing and it was always great. I'd walk around downtown and visit the small shops, listen to the mix of languages, watch unassuming people go about their daily lives.

And then back to the bus station.....where ICE began dropping off more and more refugees, regardless of our ability to provide. The detention centers are getting overcrowded and ICE is increasingly releasing more people because it simply can't handle them. ICE provides no resources at all. If it weren't for the center, there would be hundreds of refugees camping out at the bus station asking to use telephones and having nothing to eat, nowhere to sleep. Perhaps this is why the Greyhound and other counters are so helpful to us (but I always bring donuts or cookies at least once each trip to thank them).

This trip 5 Californians showed up from the Bay area, a bit younger than me but highly competent and authentic people. They walked in, asked what to do, and quickly learned the important tasks. After that it was a matter of working together, identifying priorities, and getting to know each other as we worked. The door knob on the men's showers broke one night and there was no way to secure it but the next day, two Californians, along with two members of a local family that simply stopped in to spend the day helping, went out and bought new doorknobs for each side, so that the keys would match.  Fantastic!

The father of the family also saw the sandwich process, realized we didn't have enough bread or ham, and on his own went out and bought the cartload of bread and 20 packages of ham....along with additional cheese, just in case. All donated--he didn't want any money for it.

Something "my 5 Californians" and I noticed was the lack of recycling. The center uses what is affordable--styrofoam bowls--and that is understandable. Making sandwiches we cringed at throwing away cardboard, twistie ties, plastics....but it's crisis mode and there simply isn't time or space to recycle. We also noticed this in the downtown, where even Iowa has different bins for trash, plastics, glass on the corner McAllen has only trash cans. Of course it may be different in other parts of the city, and I know it is different in other parts of the state. But it was difficult to throw recyclables in the garbage dumpster....

There are truly wonderful people who care....

I've often thought about going somewhere else, see what else is happening, perhaps further east in Texas, or the Arizona border. But then I think of the good people I've met and the work I know I can do, and I just make those flight reservations for McAllen again. I've tried several hotels but am still in search of one that is less expensive and has a way for me to cook for myself. I'll find it eventually.

Posted by From the Heartland to the Frontera at 9:09 AM