and it was much less chaotic at the Respite Center. But there were more people than even in June! Easily 150 per day.

The ICE busses pull up at the bus station around mid-afternoon. 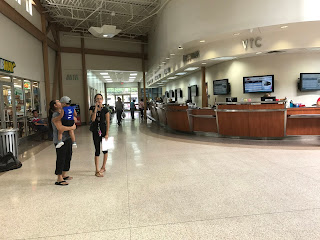 They are separated into groups who might have tickets waiting (arranged in detention, though not often) and those who need to go to the alburgue. We escort them back to the center where they sit in orderly rows (those gringos!) as we offer the children hot soup and then the adults. After their intake interview, where staff contact families to arrange for bus tickets, they will get a clean set of clothes, a shower, an evening meal, and a mat to sleep on.

The next day, with their documents secure in a manila folder, they will be escorted back to the station in small groups to collect their tickets and catch their busses. Inside the folder is a document that details their rights in Spanish, though how many can read them is questionable. And the documents from ICE, which may be their only identification. There are several stern pages of warnings....a photocopy of their "mug shot", and a date to report to ICE in their destination cities. 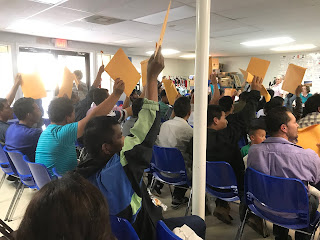 Unfortunately most, if not all, the families will be changing busses at various points during the trip, So the staff staples this to the outside of their folders: 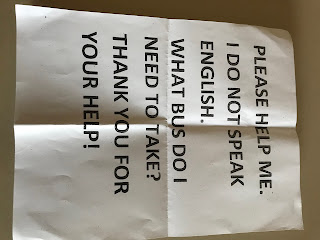 The routine hadn't changed but it was smoother and more organized. Still, it must be understood that the center is perpetually operating in a state of crisis. Decisions are made quickly and implemented, priorities are communicated, volunteers sent to whatever station needs them most.

When volunteers are few, refugees are recruited. They are great helpers and love to help. Several were in the kitchen one day. I observed a woman opening a can of beans with a pretty big knife and (internally) freaked out. I found the can openers and showed her how to use them but they weren't functioning well and it was clearly a good idea for me to move on and not see how she was going to open all those cans....

And there are usually variations to the ways in which things are done. One person washes laundry in cold water, another in warm. Jeans are to be folded in quarters, thirds, or halves. Often it is a matter of who happens to be in charge at the moment, It isn't hard to adjust, fortunately.

Posted by From the Heartland to the Frontera at 9:16 AM