the daily routine at the Respite Center

The mission of the Respite Center is to assist released detainees contact family members in the US and travel to join them. Every afternoon a group of  people is escorted from the bus station about 3 blocks away, where ICE has dropped them off, to the respite center. They file into the first large room and sit in rows of chairs waiting for an intake interview. There are only 3-4 people conducting these interviews, which focus on contacting family members and helping them reserve and pay for bus tickets. In the meantime, volunteers take the children to a second, smaller room, and offer them a hot bowl of soup and tortillas. Adults are served after the children. 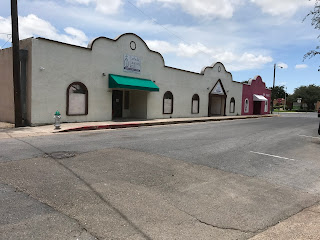 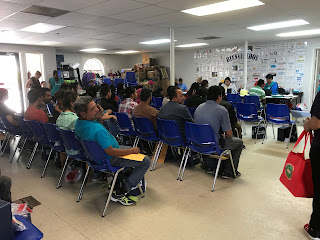 After their intake interviews, the detainees go through a process: first they are fitted for a change of clothes and perhaps shoes. Then they take turns in the showers. Later they are served an evening meal—perhaps pizza, perhaps meat and rice and beans. At night they pull out mats to sleep, and if there isn’t enough room, there is another building near by that can accommodate more.

The second day is a succession of escorting groups back to the bus station, collecting their tickets, and handing them over to other volunteers who will make sure they are on the right bus. Each family group has a snack bag with sandwiches, chips, water, granola bars—depends on the contributions that have come in. The majority of those who come in leave the following morning/early afternoon.

And in the mid afternoon another group of 150-300 detainees arrive….

The future of the detainees is uncertain. They must register with ICE within about 5 days of getting to their destinations. At some point they will be given an immigration court date at which they will request asylum. Without a lawyer, most will be denied. Legal services all over the country are mobilized to assist. My friend in Virginia accompanies 3 Latinas—one was given a court date in three weeks, a second was given a court date of August 2019.

There is little we can say to the detainees about the future. It so depends on where and when and with whom....this is not a system. It's a complete mash up of free lance operatives with no central policies or guidance. Aside from the bare minimum of physical assistance, all we have to offer is respect and compassion, a kind word, smile, games with the children, a gentle touch. A different view of America and Americans.

Posted by From the Heartland to the Frontera at 8:33 AM