Arrived in McAllen today, Tuesday, with only minor difficulties with flights. Checked into hotel and headed for the Humanitarian Respite Center.

They moved to a larger facility last December, and I hadn't seen it yet. I knew there would be much to learn but didn't know how different the routines might be. The GPS got me there and I walked in....and recognized no one. That was a bit of a shock, since I know most of the staffers. I decided to start exploring the building and found one staffer, who greeted me warmly and welcomed me back.

Then I ran into a volunteer from New Jersey I'd worked with back in September and she gave me a tour and a bit of information. First, the tour.

The laundry room has industrial size machines and they are now washing clothing as well as towels.
There are separate rooms for women's clothing, men's clothing, children's clothing, and shoes, There is a separate room for intake interviews. There is a small medical clinic, though it isn't staffed full time. The showers haven't changed; they are still in a semi trailer, 4 on one side for women, 4 on the other side for men.  The plumbing in the bathrooms in the building doesn't work so there is a nice fairly new set up of semi-permanent toilets, which replaced the porta-potties they had been using. Thank you Bay Area Border Relief!

[apologies, shift key, u/b, and random other keys stick and I don't always notice and correct.]

The building has a number of smaller rooms, perhaps they were previously offices? Small ones, though. These have mats and permit families to stay together more easily and have more privacy. Most were empty with the mats piled up but in some, people were napping or children were playing. There is space outside for children to play and a fence surrounding the property. It's in a somewhat residential area.

But it is farther from the bus station so now the busses from ICE come directly to the Respite Center to drop off detainees with ankle monitors. As arrangements are made for bus travel to family in the U.S., small groups will be taken to the bus station in a minibus.

There is a LOT more room in this building and that is wonderful!

But there seems to be rather less organization...the turnover in volunteers is much higher, though some snow birds have begun to participate. There doesn't seem to be a central system whereby volunteers are given some basic training and assignments--people either choose what they want to do or wander around waiting for someone to tell them what to do. I could see, for example, that there was clean laundry to be folded but just as I was planning to start, a volunteer with two small refugee children came in and started doing it.

The women's clothing room was a disaster and after checking with the kitchen re meals and so on, I suggested I get started there. My NJ friend agreed that it was something of a priority so I began removing chaotic piles of jeans from the shelves, sizing them, folding them, and putting them back neatly. A woman from Guatemala came in to help, and started on tops. Then another woman. So the three of us worked together for a while and I reminded them that we don't need to keep everything. Capri summer pants? Plaid dress pants? See through blouses? We set those aside and bag them for the Salvation Army.

My NJ friend looked in a bag in the middle of the room; it seemed to be good and useful clothes so we set it aside to go through later. At one point, a volunteer I don't know came in and said she'd put the bag there, hadn't gone through it, but thought we had plenty of clothes so we should just get rid of it. I'm all for decluttering...but dumping what might be useful clothes is like throwing away perfectly good food to me. So I nodded politely and moved the bag to a place 'where I could go through it later.

I was walking down the hall and noticed a small group of young and younger men, sitting at tables, with soup in front of them, likely new arrivals. They all had the infamous thousand yard stare. Across the hall, two men and a young boy were trying on sunglasses and laughing.

After getting the jeans organized, and seeing that the women were nearly done with the tops, I went out to discover that a group had just been dropped off...now that was the orderly organization I was used to. Children were taken to tables near the kitchen, sort of central to the building, and given hot soup and cold juice. Parents took seats in line to await their intake interviews, at which staff members will help them contact family and get bus tickets.

Then the parents get a change of clothing, and one for their children, and then they take showers. The two Guatemalan women who worked with me said they hadn't had a shower for 5 days before coming to us. They also said they only received cold food, usually a ham and cheese sandwich. After the showers, volunteers serve a dinner, sometimes pizzas contributed by various individuals or groups, sometimes a meal of meat, rice, beans, and tortillas. I am seldom there in the evening because I can't drive after dark and being a morning person, I am usually there by 830 or so and stay all day.

It is somewhat of a mystery how the system functions. There are staff in charge of intake, or meals, but it doesn't seem that there is one overall authority. And the volunteers sort of take on tasks, whether a priority or not. There do seem to be more asylum seekers recruited to help with sorting and serving and so on, and they are happy to contribute.

The asylum seekers haven't changed. There are small family groups, usually only one parent with one or more children with them. They are tired, uncertain, glad to have this respite but wishing for more stability. They are unfailingly respectful and sometimes, there is laughter. The needs are still urgent, though.

I had considered, on my way here, that I might not be needed, that new space and new procedures and perhaps new people would have it humming along, and maybe I'd just end up going home early. But I can see that there is a need for people with a bit of experience, some organizational skills, a sense of the procedures and therefore priorities. I'm looking forward to getting right to work tomorrow.

oh and I made it to the hotel and center just fine but yeah, got lost on the way back. Stopped at a grocery store and saw these: 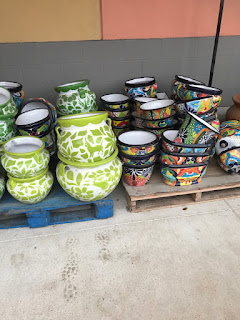 wow, gotta have a couple and hey, I have a car. Then I remembered no, it's a rental and I'm flying home....shoot.

Posted by From the Heartland to the Frontera at 3:00 PM