And I am behind by several days. It's been super busy, with five to six hundred asylum seekers each day. The first couple of days we had lots of volunteers, too many, really, The last couple of days hardly ay, meaning that we are all doing triage, multitasking, barely staying even in our efforts to get them registered (calls to families and bus/plane tickets), get them clean clothes, get them fed, and so on, AND we are low on some supplies--smaller clothes for men/women, underwear, socks, shoelaces.

and....sorry but I must go. Volunteers are non-existent early in the morning and folks need coats and hats and snack bags and.....so later I will write about the random shiz-tzu who showed up in the dining room....the fire alarm that brought bomberos right when we were dealing with 200 just-arrived asylum seekers....the missing children....updates on my favorite nun threatening to break arms....the diaper nazi....and more! btw the dog story has a happy ending....

Wow, it's just hard to keep up with everything. I take notes to remember what to talk about but never get around to it. So here goes.

The shiz-tzu.... I am moving quickly down the hall from the back to the front (btw I  ALWAYS move quickly. My nun assumes I am in a panic but really, I just operate fast when I know what I am doing)... I get to the eating area, a larger room, and stop dead at the sight of a somewhat ragged dog lying in the middle of the corridor scratching itself. It seemed sociable and was wearing a flea collar but no tags). I asked whose dog it was, having NEVER seen a dog at the center before. Someone said it was from the neighborhood so I said, well, it can't stay. It's a health violation, I assume, but also I do not like strange dogs around children who probably don't know how to treat them. So I shoo him out and take a picture and tell folks around the open door not to let him get in again. 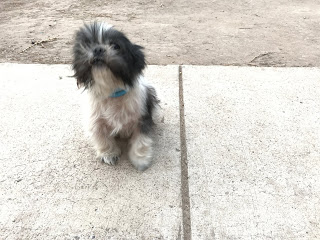 Then I'm back working in front, at reception, where I can sort of see what's needed and get it done. Soon, there's a shiz-tzu lying in the reception area, scratching. He's rather cute and quite friendly. This time I pick him up (keeping his sharp little teeth away from my face, so little do I trust strange dogs, esp small ones) and I take him out the front and walk as far from the street and the center as I can before running into someone's house.  I let him go and call the local shelter, leaving a message. I also grab a tallish box and leave it at the front just in case....

Btw I called him Oscar. I call the little kids who nag or follow me Oscar, too. It just sounds good.

I go back in and get to work and suddenly one of our drivers taps me on the shoulder and says, hey! There's a dog in here! Oscar is sitting by the door scratching himself. Ah....but I have a box! So I pick him up and lo and behold a regular volunteer, whose daughter works with rescue, sees me and Oscar and offers to take him to a safe place. Whew.

Later I learn he is in a foster home but has mange, some pus filled areas, and scratches constantly in spite of the flea collar, and matted hair and so on. But he'll get cleaned up and hopefully none of his problems are serious, and being such a cheerful, though badly behaved pup, he'll find a family that will love him. Happy ending.

Fire Alarm!
Gotta admit I thought a kid had probably pulled the alarm....and of course it was LOUD. I was at reception getting ready to help the just arrived bus load of asylum seekers. I didn't want them worried so I tried to keep the situation light...explained that even after someone got the alarm to be quiet, the fire fighters would probably show up. There was a 9 year old boy at the front of one line and he perked up so I asked if he wanted to be a bombero one day and he said Yes! So when they showed up, as predicted, and came in in their big uniforms, he was impressed. Sadly, they were unable to figure out what triggered it--not a kid, but some electrical short most likely. But I got one firefighter to say hi to our eager kid and that was a hit. We went back to work and they left....but my friend pointed out that she expected them to say we were over occupancy, which we probably were by at least 300 people! But they didn't. Thank goodness. No idea what we could have done.


Posted by From the Heartland to the Frontera at 4:57 AM