yes, we had a visit from 2 NFL players, Josh Norman  & Demario Davis (New Orleans & Washington). They got a briefing, tour, gave out gifts, helped serve food. Anything that brings attention to the center is welcome.

Super busy today, about 600 new detainees, one mid-morning bus, which made things difficult because we were also trying to coordinate getting people to the bus terminal and airport. It seems we were behind all day, just barely enough greeting bags with toiletries (then we'd rush to make more before the next bus), not having people available to give out clothes, discovering in the pm that we didn't have much to give out. Thankfully 2 young men came around 430 and were happy to help sort clothing, which I hope we can get into the clothing rooms early and then start giving out, We shall see. Nothing is ever really the same from day to day.

I was serious about giving out blankets so we wouldn't have to store them and I came across a box of bagged knitted or crocheted throw blankets.  I opened a bag to see, and they were beautiful. The one I opened had a note of encouragement and welcome adn was signed by the knitter....another had a note commenting about times her family had moved (fled Hitler's Germany, for example) and noting that any place can be home and anyone can be family. We were tearing up! 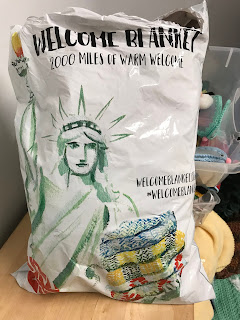 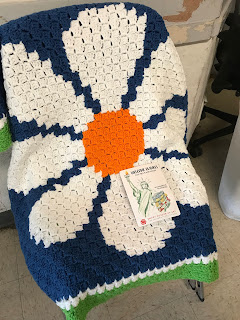 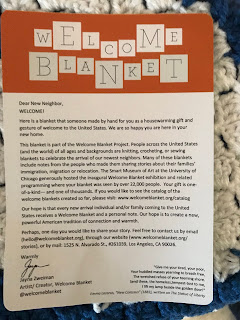 Amazing and touching.
I was waiting with a small group for the buseta and used the blankets to explain to them that the government and policies in this country don't necessarily represent the people. that was a touching moment too!

and that is a good place to stop for the day.

Posted by From the Heartland to the Frontera at 4:53 PM