I've made three trips to McAllen, TX, this year, and will likely make more. McAllen is near the border with Mexico, divided by the Rio Grande or Rio Bravo, as it is called in Mexico. I volunteer at the Catholic Charities Humanitarian Respite Center there.

My first trip, in late June 2018, was at the height of the family separation crisis. I'd done a lot of reading, contacted a number of groups, looked into a variety of locations. For some reason, McAllen came up most frequently. I was unable to contact anyone there because they were in full crisis mode. As one site said, if we have a client in front of us who needs help, that's where we direct our attention. I imagine most places were unable to process all the queries due to the overwhelming number of asylum seekers coming in.

So I just made a flight and hotel reservation and went. I was joined by a friend and together we walked in cold to the Respite Center. It's not a large building and was filled with refugees plus staff, volunteers, and politicians. We soon learned to do whatever needed doing--serve meals, play with children, sort clothing. There was always something to do. 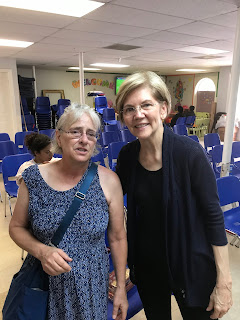 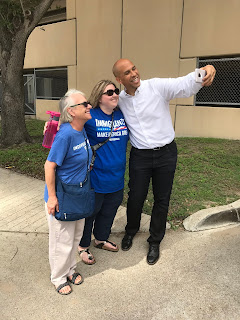 We saw and interacted with a variety of politicians--every one a Democrat. There were plenty of media people there as well. But they weren't our focus...it was the people right in front of us, hungry, dirty clothes and hair, afraid and confused, haunted faces. Those were the people we focused our attention on.

We also met Tom Steyer.  No picture because he and his wife were both there, at the Respite Center, working. They were pitching in just like any other volunteer. Super impressed.
Posted by From the Heartland to the Frontera at 6:23 AM