On my first trip to McAllen, in June, I decided to observe a court case for detainees.

First let me say that in my area of Iowa, we had a workplace ICE raid that netted close to 400 workers, mostly from Guatemala. They had been RECRUITED by the company (a kosher meat packing plant) and then were forced to purchase false identification papers FROM THE COMPANY. They were also required to buy cars only from one of the managers and to live in substandard housing. The make shift courtroom, with prosecutor, defense, and judge all already having agreed, was a travesty. But it was public. No one of color was allowed in but I persisted....a middle aged white woman, quite nonthreatening. So I thought perhaps McAllen would be similar.

We tried to go to immigration court in the morning (9:00) and were turned away. First, you can’t take anything in with you but we don’t have a car to stash things in and we need our phones for Uber….then we were told that we could go to 4th floor and talk to public defenders. So for ONE TIME ONLY they put our phones in an envelope and let us go up, with repeated warnings not to go to the 8th floor where immigration court is held.

On the 4 floor no one was available to talk to us. They have 17 public defenders and 4 investigators (and are running150-200 or more folks through court every day). But we did get info from the receptionist that there was another immigration court that afternoon, which the security folks on the first floor hadn’t told us. We were also told by security that the nearby bus station had lockers we could put our purses in.

So after being turned away we were walking down the street—-there was Corey Booker, in town to see for himself the detention center and CC. Of course we needed a pic. Then we saw that the street behind the courthouse, located in Bentsen Bldg, was blocked off and surmised that detainees were put on busses/taken off busses there. So we saw one big bus but it pulled into an area just below the bldg), out of sight of anyone. II walked over to the bus station, a block or so away, to check out the locker situation. Nice clean large building, not too crowded, but there was Nathaly, about to speak to a camera crew. She’d brought a family to the bus station but the man had forgotten the recharger for his ankle bracelet and his bus was leaving soon. I volunteered to go retrieve it for him but time was short….I partly ran partly walked back to CC, about 4-5 blocks, but we couldn’t find it. Then Alma said someone had already taken it to him. Thank goodness.

I went back to the bus station, still needing to check on lockers, and found no lockers but a woman in a small sundry shop who said they’d watch stuff for 2$ an hour. My friend and I agreed to split up: she kept our phones and I went back to the courthouse about 1 in the afternoon. I got up to the 8th floor easily, to my surprise, but the guard there said no court until two. Yes, I said, but apparently it’s crowded so I wanted to come early. I was told to come back at 2. I countered with 1:45 and he shook his head and said 2! Later I think the “crowd” was the number of detainees, not observers or the public. As I left the building again, the downstairs security said Come back at 1:45, ha ha.

I went back to the courthouse at 1:45, got to the 8th floor, and then was told to stand by the wall until the guard was sure there was room. He wanted to know why I was there and warned me not to talk to any detainees. I wonder if being a middle aged white woman with no purse or anything finally assured him that I wasn’t there to make trouble.

next, a detailed account of what went on in that court hearing. 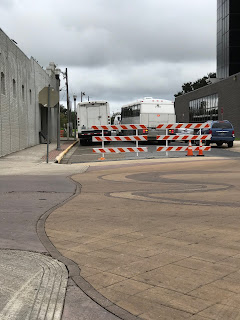 Busses at back of building where Federal Court held

For all three trips (so far) I've walked past this scene. Multiple large white busses pull up at the Bentsen Building....I never see any people. The busses enter under the building, discharge the detainees, and then pull out and park on the street. All kept well out of sight of the public. Why?

Posted by From the Heartland to the Frontera at 8:47 AM