I spent 3.5 years in Colombia, South America, after earning my degree. I call myself "media paisa", or "half Medellin", the city I lived in. From there I came to Iowa to work. I grew up in Indiana, lived in Wisconsin and Illinois, and now have been in Iowa for many years. I am a consummate Midwesterner--except for the "half paisa" part, lol.

With retirement came the freedom to pursue other passions....and then the family separation policy ignited protests all across the country and I had to get involved. Thus McAllen, quickly becoming another part of my heart and identity. 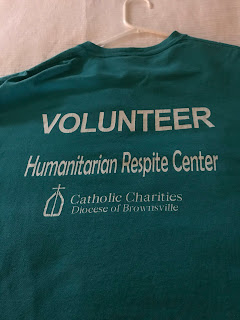 I have to say I sometimes met volunteers who knew what "Iowa" is but not a single native. I recall one even said something vague about potatoes, reminding me of a common refrain:

Iowa. It's a place. And we don't grow potatoes.

I even had my Iowa Public Radio t-shirt on, with an outline of the state...still blank looks. Ok, how about Baja Minnesota? That was met with COLD! But I bet they couldn't find it on a  map lol.

I truly liked the native Texans I met but I am wondering....if you are from Texas, you really don't need to know or care about anywhere else, maybe? Gotta say if I chose anywhere to go for retirement, Texas would have been last on my list, lol.

Posted by From the Heartland to the Frontera at 8:55 AM

Email ThisBlogThis!Share to TwitterShare to FacebookShare to Pinterest
Labels: Me