Arrived in McAllen Mon, Nov 19, in the afternoon. After checking in to the hotel, I headed to the bus station where I immediately began escorting asylum seekers to the refuge. The story has not changed in terms of ICE activity, except in the sense that the numbers grow ever larger. This is not the caravan.  Staff were expecting some 500 refugees to be dropped off at the bus station with no concern for their future. ICE is no longer helping, simply dumping. If it weren't for the center, all these detainees would be stuck at the bus station hoping that the staff there will contact their families and arrange tickets. That is ridiculous.

Instead, we escort them to the center where they can eat, shower, change clothes, contact family, and have a safe place to wait until it's time to catch the bus. Staff at the bus station and at the center are fantastic, thorough, and kind.

Heading to the center this morning (as a morning person, and also because I can't drive at night) to put in a full day of laundry, preparing snack bags and lunches, sorting clothes, and helping folks get to the bus station at the right time. I'm just one person but I am doing what I can.....

Tues Nov 20.....
As a semi-regular volunteer I was able to get right to work in the shower/laundry area. 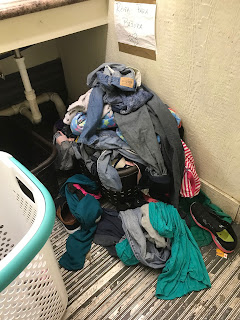 discarded clothes to be bagged and thrown out 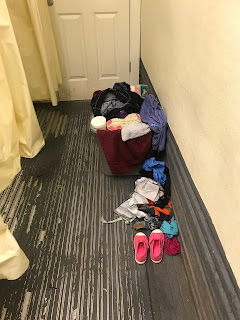 hallway in shower area, usually a second bin with towels (but I'd already moved them to the washers!) 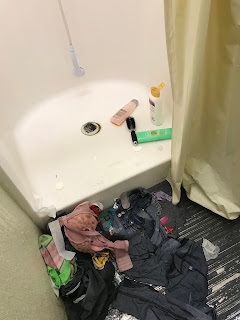 Bottom of shower with shampoo, body wash; clothes on floor outside.

I rather enjoy the laundry because it's a finite job. Bagging up old wet clothes isn't much fun but it does clear out the area. Then picking up shampoo & body wash, putting in additional as needed, gathering old razors and other debris from within and outside of the shower. Then washing down the shower and finally, what I think is the worse job, sweeping and cleaning the floor. It's covered in hair, bits of paper, bits of clothing, old packages of snack food sometimes, old bottles of water, etc etc. And the floor is always wet from showers and is ridged so it doesn't sweep easily. I was fortunate today that additional volunteers showed up and took over.

I escorted a group to the bus station for their busses out late morning and midday. There are  volunteers there as well, and folks who work for Greyhound, who help make sure everyone gets on the right bus at the right time. After that, however, they are on their own. If they have to change busses, which is often the case, they have to figure out how to find the next bus. We staple a note to each person's large envelope that says "I DON'T SPEAK ENGLISH. CAN YOU HELP ME GET ON THE RIGHT BUS? THANK YOU!"  While it seems everyone in McAllen is bilingual, that drops off considerably as one heads north.

We have a storage room/closet and a lot of bags of donations had come in so after breakfast and again after lunch, we used the eating tables to sort clothes. About 1/3 end up in bags for the Salvation Army--we redirect sleeveless tops, far too big jeans and tops, dirty or torn clothes, dresses and high heels, swimsuits, shorts, and so on. Our refugees tend to be smaller than most USA sizes and they do still want to look decent. Also, since it is a bit chilly here in McAllen, many ask for sweaters and coats, gloves and hats. I noticed today our shelves by the main door are nicely filled with blankets. The busses will be warm but they may still want the blankets for warmth and/or comfort.

200-300 arrived this afternoon at the bus station and I helped escort them to the shelter, where staff will help them contact family members and arrange for bus tickets. Most will be heading out on busses tomorrow, making room for the next drop off. And it will be the same all week, no Thanksgiving break here....

Wed the 21st....drove to Brownsville, TX to see what is happening there. Enough for a separate entry....when returned helped at the respite center, escorted refugees and for the third time in a row, managed to get lost returning to hotel. Sigh. They do like their frontage roads here, and they never seem to go the direction I want. Lighter drop offs yesterday, we will see how today goes.

Thurs the 22nd, Thanksgiving....expecting a small staff, fewer volunteers, somewhat quiet day. Morning started out as usual, some staff and some volunteers and we set to work cleaning, doing laundry, sorting clothes, etc. Then around 1030 a group from the Catholic church (all ages) appeared with containers of turkey, stuffing, gravy, corn, mashed potatoes, cookies, pie......and served all the refugees. It was really heart warming. Once the refugees were served, the volunteers and staff took time out to eat. Plenty of leftovers for later. And a photo of the servers and served: 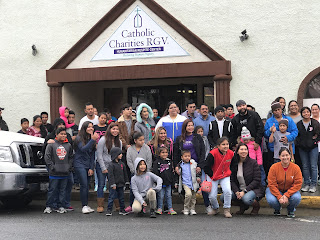 In spite of the light rain and chilly temps, we were all cheered. And then came donations of tamales, rice, beans, salad...all saved for dinner. In the afternoon we received another 200 plus refugees, cold and tired, but welcomed at the center and treated with dignity and compassion.

Today, Friday, is my last day for this trip. I expect a busy morning!

Friday Nov 23.....excellent day. The usual morning of laundry, cleaning, sorting clothes....and meeting a lovely woman heading to Connecticut (she called it "conetico"). She was funny and down to earth, jumped right in to help with any project underway (cooking, serving, sorting, sweeping) and we got along wonderfully. I sort of snickered and said (in Spanish, of course) I am SO sorry! but Connecticut is a wee bit cold.....I gave her my contact info, which is generally frowned on, but I hope we can stay in touch.

Later a teenager came up to me and said in truly lovely English "where can I get a coffee?" so I recklessly said oh, well, another volunteer wants coffee too. Let's walk to the bus station and get some! So we did and i asked about his English. He'd never been in the US and had learned from friends and I was quite impressed, knowing how difficult it is to learn a new language. Getting back I realized that it would look like favoritism so I took him in through the back and poured his coffee into a mug that would be less conspicuous than a Subway cup. He was intercepted by our volunteer coordinator, who thankfully didn't know I was the guilty party, who told him to stay in the kitchen to drink it. He left for the station a short time later with his dad and others. I went to the station with refugees later and chatted with him some more. I hope they can stay in the US!

Wandering later about a block away from the station and I saw an ICE bus pull up...so I ran. And fell. And got up and went about helping with the new arrivals, later realizing how good it was that i didn't break any bones--I have osteo and really need to be more careful.

When it was time to go, and on my last day, several of the staff were sorry, gave me hugs, and encouraged me to come back. Very timely, as I was thinking maybe it was the end of that particular ministry. Now I am excited about returning sometime in January. But no planning right now--it's laundry and cleaning and maybe decorating. Time for planning later.

Such lovely people, such heartwarming experiences. How can I give that up?

last notes....I got lost getting to hotel after respite center THREE days in a row. I studied maps, used gps....no go. Finally I turned right on a street rather than left and boom! There was the hotel. Was I looking at the map upside down?

One of the regulars saw me working in the showers and said I should be wearing gloves. I didn't, but it did sort of freak me out that she thought I should.

I really wanted my daily coke and went out walking....past a Natural Food/Nutrition store. Almost went in and then realized it was unlikely they'd be selling coke....

Posted by From the Heartland to the Frontera at 5:49 AM