The center was quiet; many asylum seekers had left for various parts of the US and new ones hadn't arrived yet. There were a lot of volunteers, which is often a mixed blessing. I didn't know them, didn't know what they knew, didn't know if things had changed, and so on. There seemed to enough folks in the clothing rooms but part of my recon was to note what might be different and help where possible.

So I kindly suggested to the 3 young women in women's clothing that as long as they had no clients, perhaps they could fold and organize the shirts a bit....they seemed offended. Could be they thought the shirts looked fine, or they'd rather chat and can't do 2 things at once, or wondered who the busybody was telling them what to do. Ha. My feelings weren't hurt.

I spied a couple of new folks that seemed really on top of things so I will get to know them better. Part of triage, knowing you can connect with the welcomer and know she'll get her folks in line handing out toiletries and so on.

Several busses and 400 new asylum seekers later we were all at work. I took several kids to the dining area for a hot bowl of soup and some bread. They are so trusting! Take my hand, leave their parent, and go with me down the hall, where I turn them over to the servers and know they will get back to their parents soon.

A bit after 4, I had to leave--had gotten up early for the flights and was feeling a little bit sick. There was plenty of help so no problem. Now after a decent night's sleep I am ready to head back. Lisa arrives tonight and it will be great to work together this week. 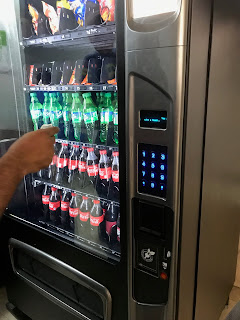 Posted by From the Heartland to the Frontera at 4:21 AM